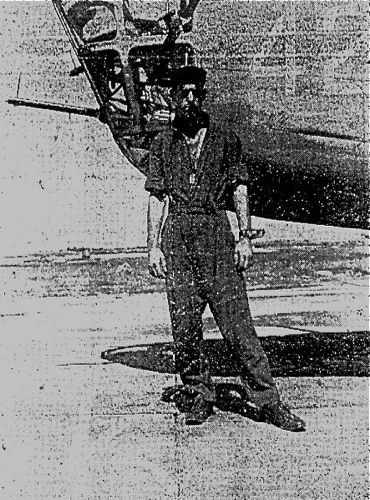 The above photo and accompanying text first appeared in the Sunnyvale Standard (California) on Friday, July 14, 1944:

S/Sgt. Robert J. Reposa, 20, son of Mr. and Mrs. Joseph L. Reposa, 277 Charles Street, ball turret gunner on a B-24 Liberator heavy bombardment aircraft, has flown his fiftieth combat mission over enemy territory in nazi-Europe, a communique directly from the AAF in Italy revealed today. He has participated in bombing attacks over Italy, Greece, Austria, Roumania, Bulgaria, Hungary, France and Germany. His first combat mission was over Gorzio, Italy, and his fiftieth mission was to a target in Munich, Germany.

When questioned as to his most exciting mission, Sgt. Reposa replied: "Last May, our target was the ME-109 aircraft factory at Weiner-Neustadt, Austria. About 10 minutes from the target, we were attacked by five enemy fighters who had broken away from a dogfight with our P-51 escort. These fighters were eager and very experienced fighters. They dove all around us, peppering our ship with machine gun and cannon fire. The flak was intense and accurate, and we could hear the fragments slapping against the sides of the ship, tearing away the metal. Soon our escort overwhelmed the fighters, drove them off and we made our bomb run and returned to our home base without any further trouble."

Before entering the army, February 4, 1943, Sgt, Reposa was employed by the Diller Moore Dry Dock Co., Oakland, Calif. He attended the San Jose Technical high school, and while in the army, attended armament school at Lowry Field, Denver, Colo., and the gunnery school at Ft. Myers, Fla.

Sgt. Reposa has been awarded the good conduct medal, the air medal, plus five oak leaf clusters, and the European-African-Middle East ribbon, plus one star.