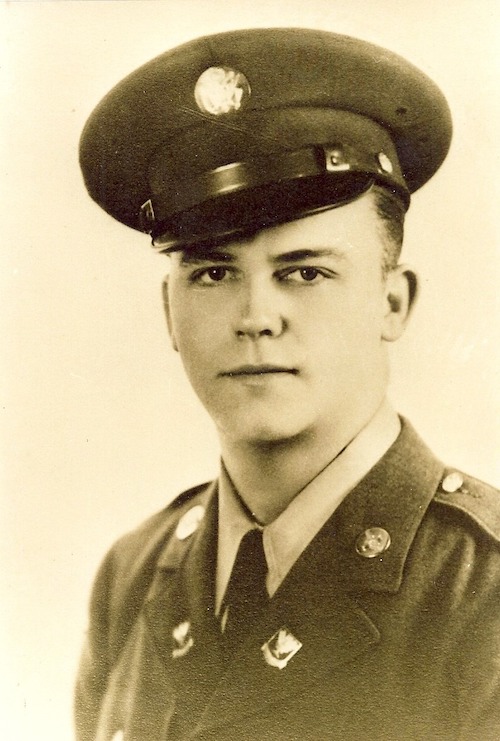 The following is a very brief history of my father's service.  He joined Army Air Corps in the summer of 1943.  After training in the States, he was eventually assigned to the 376th Bomb Group, 515 B. Sqd. on September 29, 1943.  He flew 22 missions being shot down on the last.  He was a waist gunner on Oscar Frechette's B24.  Their last mission was to Vincenza Italy on December 28,1943.  It was determined later their plane went down in Lake Camacchio.  He was captured by the Germans and spent the remainder of the war in Stalag XVIIB in Krems, Austria.  He was liberated on May 3, 1945.

I was very fortunate to receive all of my late father's medals and campaign ribbons for my birthday.  Upon receipt I started researching to determine the correct identification for each.  Using the Internet I was able to find very good likeness and descriptions of all.  But the two pictured here are puzzling.  The only likeness of these two are a Navy Presidential Unit Citation and the other a Navy Unit Commendation.  My father never saw service in the Navy.  I would be very grateful for any information about these two citations and why a member of the 376th would have them.  Please contact me at the email address below.﻿

Jeff has asked that if anyone has thoughts about the Navy Unit Commendation, he would appreciate hearing those thoughts.  His email address is:

Jeff sent his father's recollection of the events on December 28, 1943.  He was shot down 28 December 1943 on the disastrous mission to bomb the marshalling yard at Vicenza, Italy. Of the seventeen B24s on the mission, ten were lost after being attacked by more than 100 German fighters. Palmer was a waist gunner on the plane piloted by Lt. Oscar Frechette. Palmer remembered a particularly harrowing bailout experience: