Joseph C. Komurke was a radio operator with HALPRO.  He was not an original member of HALPRO, but joined them on their deployment journey. He described how he joined HALPRO and his time with them in a brief letter.  It is repeated below.  We have a picture of him with the Edward A. Crouchley crew.

Yes, it was nice talking to you about Halpro and certainly a surprise. I will gladly loan you what little I have in the way of pictures, orders, etc., and would appreciate their return. I would also like a copy of the history you finalize.

When Halpro arrived in Accra I was a member of the Ferrying Command stationed at Accra with very little to do and with a feeling that I was not contributing to the war effort. I had known James C. Woodyard, then a Warrant Officer, before when we were stationed together at Brooks Field, San Antonio, Texas. After I expressed a desire to join their group as a radio-operator gunner, he coordinated through Arthur L. Cox (Communications Officer) and others and I was accepted on the spot.

George J. De Cisneros, W/O was assistant adjutant. He made me a service record, wrote the necessary orders and I became a member of the Halpro Task Force.

I guess the group must have thought that I had some previous training as a crew member on a bomber but I had never been on a bomber before. I had flown as a radio operator in observation planes, had never fired a machine gun and had never worn an oxygen mask., Later I wore an oxygen mask on our first mission and fired my first machine-gun burst at a ME-109.

I was accepted in Halpro’s organization as a spare radio operator gunner and I found out later that Lt. Cox had hopes of taking me off a crew and assigning me to a ground job because of my rank (T/Sgt.) and experience. However, I stayed on as crew member. T/Sgt Portl and I were the only NCO above the rank of S/Sgt. flying as crew members.

I do not remember Perry of the Ferrying Command and I always thought I was the only crew member added. I cannot imagine a person going AWOL at Accra and cannot imagine, if he did, how he lived.

I did leave with Paullin’s crew from Accra through Khartoum to an airport near Port Said (Suez Canal) where we established our operations.

Our first mission was a before-dawn attack on the Ploesti (Romania) oil refinery. This was about a 12 - 13 hour mission, our longest and four planes and their crews were interned in Turkey because of gas shortage. One issue of Life magazine had a story and pictures of these crews. I made this mission in "Yank" with P. Davis pilot, and Crouchley replacing the radio operator Venegas.

I flew with many of the crews as replacement radio operator. I remember some of the crews in particular: Sibert, Paullen, but I flew most of the time in "Yank" with Crouchley as pilot instead of Davis and various co-pilots. After a few missions I became a regular crew member on "Yank" replacing Venegas who later was KIA on another plane.

Most of our routine missions were against shipping in the Mediterranean. We were told we were very successful in stopping the "Desert Fox's" drive across the desert.

One of the milk runs was shipping at Benghazie, many missions to the boot of Italy and I remember at least one to Messina.

I am sending the photos, etc., that I have and hope you find some of it useful. Please return it. I wish you total success and feel free to contact me for any assistance possible.

He also sent a couple of newspaper clippings. 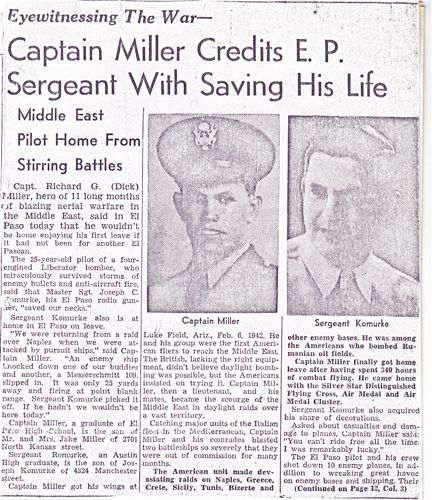 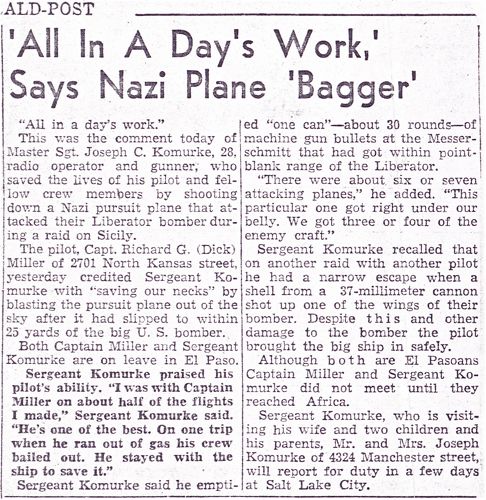