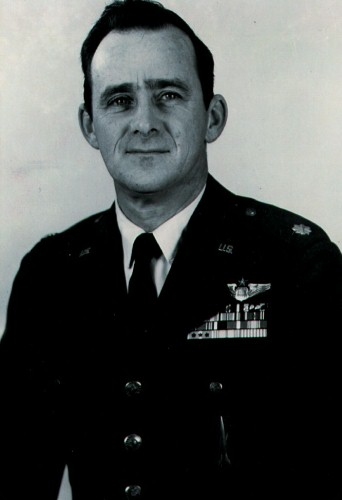 Myron Holmes was the bombardier on the Fritz Sandberg crew. He retired from the USAF.

To begin with, I’m a bombardier in the Liberandos, one of the most outstanding heavy bomb groups  in the AAE, and while it’s the most comfortable feeling in the world to know that you’re surrounded by the crack flies of an experienced bomb group when the opposition meets you, there’s just the opposite feeling when thousands of those guys fighting on the ground are banking their lives on that reputation and it’s your turn to uphold it.  This is what happened when my turn came up.

After watching the blue line on the map that told where the Americans who had invaded at the Anzio beach head were, on the morning of February 10th, we were told that we had a job of bombing a crossroads point just over the line.  The Germans had moved up faster than was expected and were using artillery and tanks to drive troops from the beach head.  The Americans there were fighting back with all they had, but the superior force of equipment that the Germans were able to muster from the surrounding area and bad weather had prevented the air support of our troops on the beach head, gave them the upper hand and was beginning of the chain of events which led to the temporary change of our outfit from a strategic to a tactical bombing force.

Key to the entire situation was the crossroad where two highways and a railroad crossed.  At this point, the Germans were unloading the artillery and the ammunition and there seemed to be no way to stop them.  Fighters and the tactical bombers were laying strings of bombs along the roads leading to the place but they needed a large concentration of large bombs right at the intersection to wipe out the strong fortress that they had built around it.

Take-off was at 7:15 AM.  Lt. F. R. Sandberg of Plano, Illinois was my pilot and we were leading a formation of 18 B-24’s.  I had all the confidence in the world in Sandy because I had been flying with him for a long time, but this job of leading a large formation was a tough one that he’d just taken over.  This was the first time that the mission depended on what we did in that lead ship and I’ll admit that I was feeling the strain as we started off and circled the field.  It’s bad enough when you have to worry only about whether you’re going to get back, but when you worry about where the bombs of the entire formation are going to land, it’s as good as a one way ticket to a nervous breakdown.

After the formation closed in on our ship and we formed a closely packed unit, the pilot switched over to the automatic flight controls and I was guiding the eighteen fully loaded four engine bombers with the bombsight.  Just a twist of the wrist and the entire formation with its seventy two engines pounding would change their course.  I felt like the helmsman on the Normandie.

Then it happened: Call it what you will but it was the same thing that makes the radio tubes burn out when Dinah Shore is singing your favorite song.  Try as I may, I couldn’t make that bombsight do a single trick.  It was just that one chance in a million when something goes wrong with the mechanism and the bombsight that made the AAF the best in the world refuses to function.  Sandy took over the controls then, and as we passed over the Isle of Capri, I was applying all the tricks I knew and had finally got it going again.  We were at 15,000 feet and the target was just over the coastline.

It was all set now.  In spite of a little soupy weather over the beachhead, the navigator, 1st Lt. Martin J Burgwinkle, of 26 Beacon Street, Clinton, MA had picked out the course and we were on our bomb run.  The twisting funnels of air coming from the props of the section ahead of us began to throw us all over the sky and the target was only two minutes off/  Maneuvering the entire formation to the side of the section in front of us, Sandy leveled out on another heading but by this time  the target was coming up fast.  I thought if anything else happened to mess up the bomb run, I’d shoot myself, but I was wrong.  It happened and I didn’t.  It was the bombsight again.  The violent maneuvers in the prop wash had evidently brought on a relapse and the target was a scant forty seconds off.  It could still be used as a drift meter though, so I based everything I had on that.  The flak was coming up thick and accurate and there wasn’t enough time to make another run.  I was shouting corrections to the pilot over the interphone while I had my eye glued to the improvised drift meter.  I could see myself flying as tail end Charlie for the duration of the war if I dropped them in the wrong place and I don’t know what would have happened if I were to drop them through the haze on the American troops that were struggling for their lives below us but I had seen the targets through that bombsight before and I released the load just as the crossroad passed before my eyes.

From that altitude the bombs take about 25 seconds to hit the ground, but as the bombs from the eighteen ships fell it seemed like the weekend for the grading of the final examination papers.  I didn’t take my eyes off of the target once, in spite of the fact that the German and American Air forces were putting on one of the greatest air shows in history all around us.

Then, ages later, the bombs from our section hit the crossroads and the effect was like hitting a box of powder with a sledge hammer.  Smoke covered the area, then two violent explosions flashed instantly and sent a tower of smoke into the air.

It was then I realized that a show was going on around me.  We were heading out of the flak area and toward the ocean and the traffic caused by huge groups of bombers and fighters looked like a view into the future.  Lightnings, Thunderbolts, and Spitfires screamed through the air and Axis and Allied fighters alike fought with the tenacity born of a determination to help the men on the ground.

Three or four minutes later, everything was quiet.  We were behind the same formation of bombers that we had followed from our base.  The Isle of Capri was creeping  toward us and there wasn’t a ship in the formation that was having trouble.  I knew Sandy and all the rest of the crew felt the same.  We had come through on the first mission we had led and we had done a lot more than cross our fingers for the men who were battling it out on the ground.

We’ll take our turn leading the formation – sure.  We won’t be in front of every mission ‘cause that one mission doesn’t prove that we have the best crew in the world, but when I’m watching the flak and fighters while I wait for the lead ship to drop from now on, I’m not going to wish that the lead bombardier were in hell.  He will be.