Raymond Wick was a radio operator with the Joe Dunfee crew, 513th squadron.﻿

When my uncle came home from the war he did not speak a lot about the experiences he had, and I was too young to ask. My family does not know a lot about what my Uncle Ray went through during the war and I would like to give every one in my family more insight about what happened during the time Raymond was overseas. I have some information about my uncle but I would like to get more. I know he was stationed in San Pancrazio, Italy, 376th HBG, 513th Bomb Squad, my uncle was part of two crews. The first crew he was in he did not fly a single mission with them. Raymond was asked on 2/23/1944 at 4:00 am to fill in for another crew. The crew my uncle filled in for on his first mission on an air raid over Styer, Austria where shot down. I have the roster of his original crew and the crew he was shot down with. 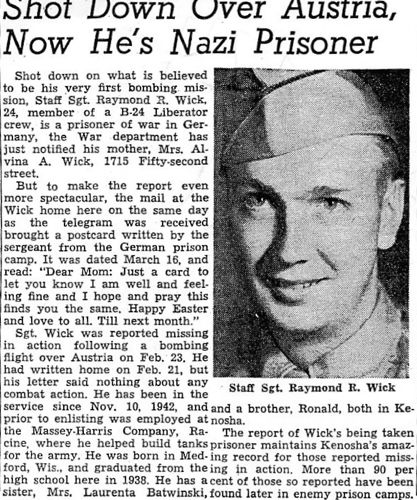