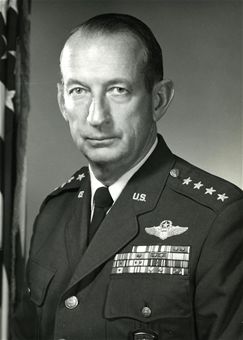 Horace Wade was a pilot with the Brereton Detachment, whose crew transferred from India to the Middle East.

He was born in 1916, in Magnolia, Ark. After completing high school in Wortham, Texas, he returned to Arkansas, and graduated from the Magnolia Agricultural and Mechanical Junior College in 1936. In February 1948 he received his bachelor of science degree in business administration from the University of Arkansas. His military career began in 1934 when he became a member of Company D, 153rd Infantry, Arkansas National Guard. He entered the Army Air Corps Flying School, Randolph Field, Texas, in 1937, and upon graduating and receiving his wings, in October 1938, was commissioned as a second lieutenant, Air Corps Reserve, U.S. Army.

Upon completion of flying training, he was assigned to the 11th Bombardment Squadron, 7th Bombardment Group, Hamilton Field, Calif., and in December 1941, was deployed with this unit to the Southwest Pacific. He also served in the China-Burma-India and the Middle Eastern Theaters of Operations, accumulating 36 combat missions in B-17s and B-24s before returning to the United States in 1943.

After a short tour as commander of the 29th Bombardment Group, Gowen Field, Idaho, and a few months as a Tactical Air inspector for the Second Air Force, he was transferred, in July 1944, to the War Department, General Staff. In March 1946 he was assigned to Headquarters Air Transport Command as deputy chief of staff.

He completed the National War College, in June 1955, and was assigned as director of personnel, Headquarters Strategic Air Command, Offutt Air Force Base, Neb. In the summer of 1959, he was designated the commander of the 4310th Air Division (SAC), Nouasseur Air Base, Morocco, and in October 1961, was assigned as deputy commander, Eighth Air Force, Westover Air Force Base, Mass. In August 1962 he returned to the Pentagon to serve as the assistant deputy chief of staff, plans and programs, Headquarters U.S. Air Force.

On Dec. 1, 1964, General Wade was named commander, Eighth Air Force, Westover Air Force Base, Mass., and was promoted to the grade of lieutenant general; in August 1966, he was again returned to Headquarters U.S. Air Force -- this time as deputy chief of staff for personnel. On Aug. 1, 1968 he was designated as commander in chief, U.S. Air Forces in Europe, Wiesbaden, Germany, and concurrently as commander, Fourth Allied Tactical Air Force, Allied Command Europe, and was promoted to general. In February 1969 he was appointed chief of staff, Supreme Headquarters Allied Powers Europe.

He is a command pilot, maintains his proficiency in multijet aircraft and has more than 8,450 hours of flying time.