Walter E. Price was the navigator on the Marvin Grice crew.

Walter submitted a brief bio of his experiences:

After speaking to you last night, I am sending this for further enlightenment.

The Pomeroy Provisional Group composed of 50 complete crews sailed from Norfolk, VA on December 7, 1943, arriving at Casablanca December 15, 1943.  We were flown out of Casablanca, 25 crews of us to San Pancrazio on January 1, 1944.  The other 25 crews went to the 98th Bomb Group.

We began combat missions in early February after having practice exercises until then.  On February 23, 1944 we found ourselves on our 8th mission to Steyr, Austria (in the middle of Big Week)(February 20-25).  Our crew was in the 515th Squadron and were flying “Harry the Horse,” a Damon Runyon character.  Red Thompson who was the squadron leader insisted on the planes in the 515th be named after the Damon Runyon characters.

Our crew was composed of Marvin E Grice, pilot; Lamar Howard, co-pilot; John Byrne, bombardier; Walter Price, navigator; Max Rassmusson, top turret and engineer; Steve Swidarski, nose turret; John Scharnitzski, tail turret; Arial Hoffman, ball turret; Thomas Root and Frank Herman, waist gunners.  On the 23rd Scharnitzski did not fly due to frostbite incurred on the Regensberg mission of the 22nd.  In his place, John Pizzello flew with us.  During the mission Herman, Root, and Hoffman were KIA.  The rest of us bailed out and were sent to Stalag Luft I (for officers) and Stalag IV (for enlisted MEN)

I understand that Scharnitski was shot down on June 7, 1944 while flying with another crew.  At any rate, he is deceased, along with Marvin Grice who died some several years ago of natural causes.  His widow survives him.

All of our surviving crew are members of the Association and I have requested that Doris Grice, Marvin’s Widow be awarded a free membership but I’m not aware of anything being done in this regard.  Perhaps you could help me with this.

Also, do you have any idea what could be done to recognize the bravery of Max Rasmusson who while risking his life stayed with the plane until he was able to free Grice, which allowed him to get out of the plane.  The plane crashed very shortly after they parachuted.  Max most certainly would have been cited for his actions had we not been shot down.  Dorris Grice will substantiate Max’s bravery from letters and conversation that she had with her husband prior to his death.

I am enclosing some pictures, etc. recently acquired by Lamar Howard on his trip to the site of our crash.  You will notice that the Germans (Austrians) referred to this time as the “The Week of the White Death.”

He then elaborated on the heroism of Max Rasmusson in a follow-up letter: 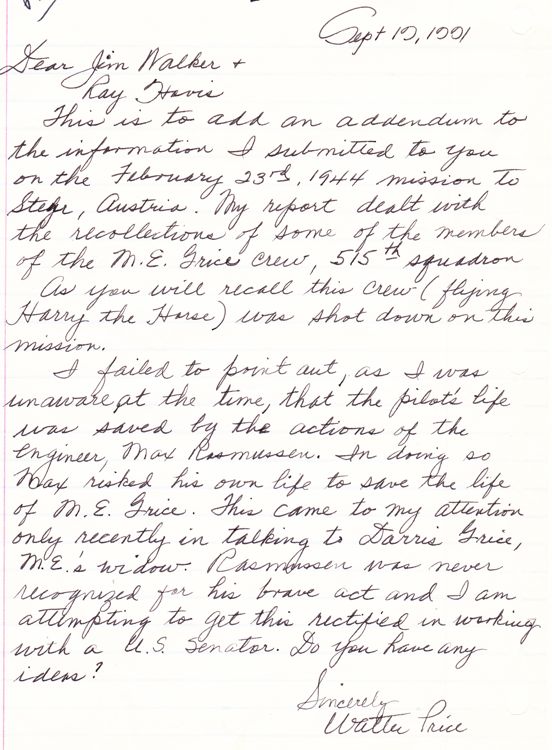