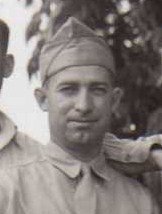 Clark D Payne was a crew chief in the 512 Squadron.  The other members of his crew were: Sgts. Bender, Bogue, Estes, Bond, and Scotty Dalstead as armament man.

Clark submitted the story about his crew and the Strawberry Bitch.

I, Clark D. Payne, left Newport News, Virginia on Sunday Dec.21, 1942 with about 400 or more  troops to join the 376th Bomb Group. At the time we joined the group in February 1943 they were operating out of Soluch, Libya. I would like to give some history of the B-24 air plane known as Strawberry Bitch now on display at the Air Force Museum in Ohio.

I was the maintenance crew chief along with other ground crew member’s. They were Sgt.Bender, Bogue, Estes, Bond, and Scotty Dalstead as armament man. This crew handled the plane from the time it arrived to 512th Bomb Sqn 376the heavy bombardment group at Enfidaville, Tunisia. In early October 1943, I along with my crew was assigned to perform maintenance and service on it. We spent two days getting it ready for combat flights. Mid afternoon on October 3rd Master Sergeant Metzler the line chief told me to get my clothes ready as the planes were going back to Berka It. to stay with the58th service squadron and I would have to go too. We left Enfidaville late afternoon and that made us after night getting to Berka. The crew flying this plane to Berka, was I believe the same crew that had flown it from the U.S. over there. We had to land without any runway lights; I was told that the pilot had never landed a B-24 at night without runway lights. By the time we arrived at Berka some of the pilots that had flown in and out while we were stationed there had landed and taxi around to the end of the runway and turned their plane’s lights on the end of the runway. The first two approaches the pilot made to land was to high so we had to pull up and circle around. On the third approach I could see on the pilot’s face, that he was desperate to land. On this approach he landed. It was not a smooth landing by no means but the landing gear held.  The next day, Oct. 4th , Strawberry Bitch made its first bomb run to Tatoi Airdrome Athens, Greece and returned without any damage. The following day it made the bomb run over Eleusis Airdrome near Athens, Greece. On that trip it got a direct hit, on top of the left wing in between no#3 and 4 gas cells knocking out both gas cells and damaging the main wing spar between those two cells.

On October 11th the group flew back to Enfidaville leaving Strawberry Bitch down there with the 58th service squadron to repair.  Sometime around the 20th of November the group began to move to San-Pancrazie , Italy, after being in San Pancrazie, for three to four months. One afternoon as the group’s planes were landing from a mission that day the Strawberry Bitch landed after being fully repaired by the 58th service squad, my crew and I were reassigned to maintain it. To the best of my knowledge it did not have any more major damage the rest of the time that I was the crew chief, I left the group in August, 1944 and came back to the United States and went to maintenance school on  B-29’s. I did not hear any more about it until I received two of the 376th first history books and a post card picture was in one of the books. I was in the 512th squadron. I am 92 years old and wanted to write some of the things I remembered about this plane and its missions.