James C. Naugle was the radio operator on the Gerald Duncan crew.

James wrote an article for the March 1990 issue of Military magazine.  Click on the dates to read about the specific missions he wrote about.

B-24 Notes and Memories

Just to give you a little of my background, I shipped over from Newport News, Virginia on September 11, 1944. I turned 20 years of age (19 September) while on a Liberty ship, the USS Joseph Gales. We were part of a large transport convoy crossing the Atlantic on the way to Naples, Italy, when destroyers that were escorting us, started dropping depth charges around us. We were on board that old crate for 26 days. The ship almost hit a floating mine when we were in the Mediterranean Sea, near North Africa. Lucky it was during the daytime, and everyone on deck could see it. But it shook me up.

I was a radio operator mechanic gunner (ROMG) with a B-24 air crew and flew, in the upper gun turret except when we were flying as lead crew. Then I would be on the flight deck as lead radio operator behind the co-pilot. The only other times that I would have to be on our radio was when we lost an engine over the targets or had to drop out of our formation: This occurred several times. The first time it happened was on our fifth sortie and/or seventh mission.

We lost a lot of our good friends that were like brothers to me since I had spent more than a year with some of them.

But not all memories are sad. I don't remember all of the minor problems that occurred, but I do have a copy of our aerial engineer's diary (T/Sgt. Wendell E. Wilkins) on a cassette tape that he made in 1985. With that I have a record of the dates, time in the air, target locations and holes in the old. B-24. We were together on all missions and we were both assigned to the flight deck after our first mission to Munich, Germany. I will give you a short account of that first mission. We didn't get too scared, but we did get pretty excited.

These last two items are from Wendell's diary.

11 December 1944: Monday, seven hours, 40 minutes. Today we had a rough mission to Vienna. We hit the Moosbierbaum Oil Refinery. The flak ' was heavy, intense and accurate. We received about 20 holes in our plane (#82).

This mission and the one to Ferrara, Italy had been our two roughest missions. I hate to take many more as bad as this one. Every plane was hit pretty bad. Lt. Price (our bombardier) was sick and didn't go today. (15th mission and/or 11th sortie.)

We were the last box to go over and they threw the works up at us. Flak was intense, heavy and accurate. We' bombed from an altitude of 25,500 ft. A hydraulic line running to the right accumulator was shot in two by flak. We lost most of our hydraulic fluid. I had to crawl out on the catwalk in the bomb bays with the doors open and crank them shut by hand.

Then I repaired the line and poured some more fluid, from the tail gun turret, in the reservoir. We didn't have good brakes when we landed. (#86).

It was a tough mission for me, and I was very tired when it was over. We carried eight 500 lb. bombs. One plane, (#92) had to crash land on our runway. Its engineer was killed. Four others were badly hurt, all from our squadron. (32nd mission and/or 20th sortie). 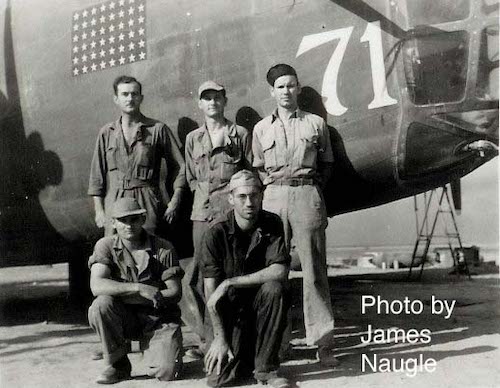