Through the Eye of the Needle

In 1944, the Luftwaffe· was able to put up a fight and the American Air Force was able to cause severe damage to German transportation and petrol supplies. In early May, our group had received orders to fly two missions a day in anticipation of the future invasion of France. Since our missions from Italy were very long, it was difficult to accomplish, even though we got up at 3:00 a.m. to be able to take off at daybreak.

On May 29, 1944, our mission was the Messerschmitt Assembly Plant in Wiener Neustadt, Austria. At this time the strength of the enemy fighters was diminished by the increased American fighter strength and success. Our briefing was: good weather; no fighters expected in the area; expect heavy anti-aircraft fire. We approached the target on schedule, entered the initial point (IP). which meant flying straight, holding an altitude level for a "bomb run.” The enemy threw up a wall of "flak" over the target~ we made the bomb run and released our bombs on the target A few seconds after "bombs away," we received a direct flak hit in the left bomb bay, which was where all of the control cables passed through the left side of the aircraft. The flak hit severed them. As a result, our plane went out of control in a "flat spin." The navigator, Harry Hansen, saw one engine on fire and rang the "bail-out bell." The co-pilot on this mission was Donald Deward who later told me that the pilot was taking too much time trying to get the autopilot to take control, the airspeed indicator was winding up, and that the pilot, Whaley, rang the bail-out bell and motioned Deward to “get out." Deward went out fast to the open bomb bay where Hansen seemed to be hung up on something; Deward pushed Hansen out and then he. himself: jumped. Both the navigator and co-pilot were saved and became POWs.

The radio operator was in the nose turret and I was at the bomb sight; we felt the jolt of the flak hit The nose gunner, Sprentz, came out of his turret and motioned me to make preparation to jump. We had chest parachutes that were on the navigator)s table. I gave him his parachute, but he would not take it J, therefore, put it on the ammunition box beside him and attached mine. I could feel the increasing speed of the aircraft and opened the emergency nose-wheel door by using the emergency release handle. The nose-wheel doors were opened, but Sprentz still refused to put his parachute on.

I do not know whether it was instinct or by divine providence, but I had been taught to move quickly, so with hands down holding my chest chute} I jumped out of the small nose-wheel door opening. At this time, the aircraft had obtained an excessive airspeed for a 9-24 Liberator. We were at approximately 20,000 feet altitude and the high speed of the disabled aircraft was so fast that I was hurled so violently and out of control that it was minutes before I had slowed enough to get into the "feet-first position” for chute opening. Because of the violent Whipping, the tacking on my parachute had broken loose from the harness. l, hand-over-hand, pulled the chute down so that I could pull the rip chord. The chute opened. It was an answer to my prayers.

I landed safely in a small park. All was quiet; the residences were in the bomb shelters. I discovered that my left shoe was full of blood from a wound on my left leg. The violent action of the high speed by the aircraft had caused my flying boots, my wrist watch. and my cap to be torn away. I followed instructions and gathered the chute to immediately hide it as best I could under the trees, in the leaves and vines. I moved into a wooded area near a barracks where I could see soldiers going and coming. I could see soldiers close by looking for me. I hid as best I could under the available vines and leaves. The soldiers kept looking up into the trees, and soon left.

I waited until darkness, then started moving southward, toward Yugoslavia as I was instructed in escape briefings. I moved late at night in order to stay off roads and to stay in the woods. This was not easy because I kept running into farm houses where the dogs gave off the alarm. I moved up to a road where there was a bridge to cross a small stream. On the road, I was surprised by two soldiers riding bicycles. They seemed to not be armed; they approached and asked me in German if I was from “Wien" (Vienna). I replied, "Nein" (no). They asked if I was a "Rusky." I replied "Nein." Then the one who seemed to be the leader said in English, "You wait here." I knew they knew who I was. I placed my right hand into my jacket under the left armpit where an officer usually kept his firearm. We did not fly with our "45s" over enemy territory; it was not practical. The bluff worked and they did not try to follow.

I started walking into a rye field. I had to get across that stream even if I had to swim across. The stream was swift, but I made it and moved on in my soaked condition. The sun came up and I was on top of a small hill in the woods. It was May 30th and warm enough to try to dry my clothes. My wound had become very bad, and I was hopping along in my long underwear, hanging my clothes on the bushes to dry, when all of a sudden a group of women came through the area carrying lunch baskets. They were laughing and pointing at me in my underwear hopping on one foot. One of them spotted my jacket with the 15th Air Force patch on the sleeve; she let out a shout "parachutist" and they started screaming at me in English, "The women and children you kill." I had heard of what a lynching was like. Suddenly the men folk came onto the scene. There were two German soldiers with them and the soldiers took charge and quieted the women. This group took me to the German barracks. The German officer in charge assigned two handsome young soldiers to walk me to the nearby gymnasium where the Luftwaffe took airmen from the bombing raids. While I was hopping, the two young guards walked beside me to the gymnasium. Women were following, screaming insults, young boys were yelling at me, and dogs were yapping at my heels. The two guards obeyed their orders, kept the mob away from me, and delivered me to the gymnasium. There were quite a number of airmen from the 15th Air Force held in the large area, in custody. Among them were Deward, the co-pilot, Hansen, the navigator, and Shermerhom (who had since replaced Fazendin), the waste gunner. Shermerhom had landed in an area of Russian women who supplied him with a Russian suit that was too small for his large frame and no shoes. When he arrived at the barracks, he looked ridiculous in his ill-fitting uniform and socks.

Deward, Hansen, Shermerhom and myself were the survivors of our crew. We surmised that Whaley, the pilot, tried to force Howard, the flight engineer, out of the top turret. He had resisted the navigator's attempts and always, under dangerous crisis situations, refused to put on his parachute which indicated a suicidal tendency. If this is what happened, Whaley gave his life trying to force Howard to save his.

The German medics were tending the many wounded. When they came to me, my flak wound was shaved with a dry, straight razor and painted with brown liquid then bandaged with a roll of brown paper. Not having medical supplies was an indication of the desperate difficulty Hitler's people were in.

When we were being moved by train to interrogation and afterwards to Stalag Loft III, we witnessed the guards and soldier passengers giving desperate housewives bread from their rations in their packs. I never will forget the look of grateful relief on the faces of these women and the desperate condition of the lives that National Socialism caused the German civilians to bear.

This is the letter his wife received regarding his actual rank. 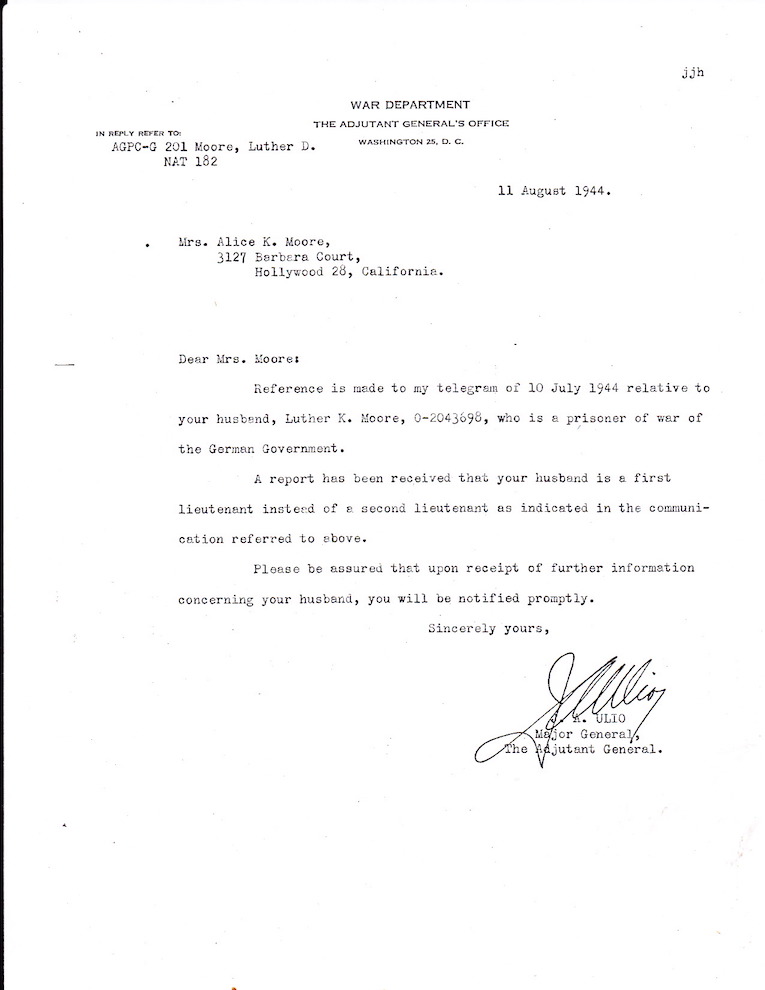 These are copies of his POW papers: