2.     Plane developed a tail flutter and crew was ordered to bail out over the middle of the Adriatic about 50 miles north of Vis.  All men abandoned ship

4.     The rescue plane, a Catalina, tried to takeoff on a rough sea and cracked up

5.     We were re-rescued from our rafts by an LCI (British) which shelled the Catalina

7.     Lt Morgenbesser, who had been in water the longest (4 hours) went by C-47 to Bari for hospitalization with pnenmonia – released Sep 23.

9.     All men who had missions in the forties were excused from further combat flying

11.  Our original crew is all through flying now except Lt. Clark who has four missions left at this writing

Robert wrote a second account of that day in 1944: 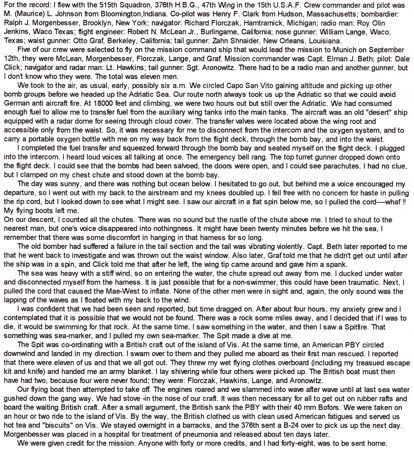