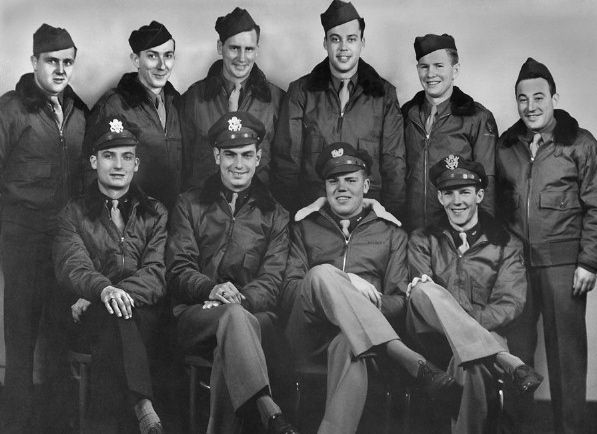 George LaRoe crew was assigned to the 512th Squadron.

Back Row Standing, Left to Right:

The crew came together in July, 1944, at Westover Field, MA, for our crew training and preparation for our trip overseas. Upon completion the crew was sent to Mitchell Field, Long Island, NY. A new B-24 was to be there to be ferried overseas. The new planes never arrived, a labor strike at the Willow Run plant. So Lt. LaRoe's crew and others were sent to Camp Patrick Henry, VA, and then to Newport News Port of Embarkation. There LaRoe's crew was put on a Liberty ship, Ponce de Leon, and sailed Oct. 21, 1944. Ponce de Leon joined a convoy and headed east.

Our ship went to Oran, Algiers, docked, and some crews were off-loaded onto a French "Camel Boat." Such dirt and filth one has never seen. The captain in charge of the air crews refused to let them feed us the fish head soup they had prepared. There were C-Rations that night and a complete GI job onthe kitchen by the ship's crew the next day. It was so hot and filthy below decks in the open hold that the crew slept on the deck. The Ponce de Leon proceeded to France,and, in due time the French boat proceeded to Naples.After landing in Naples, the crew went to a replacement depot and was then assigned to the 376th. Into the 40 and 8 cars the crews went - cold, no heat except smudge pots of coal. Cold rations were the order of the days. After a day and night on the "train", everyone's eyes and noses were so full of soot it was better to freeze than to drown in your own secretions.Eventually we arrived in southern Italy, Taranto, and proceeded to San Pancrazio, the 376th Bomb Group, and the 512th Squadron arriving on Nov. 19, 1944.

The crew lived in tents. The officers chose to have Italian laborers erect the tufa block walls wood floors and a pyramid tent on top. The construction charges were paid by the officers. By mid-December, 1944, our quarters were complete, with a 100 octane gas heater that frequently went out, then poofed back on, with soot everywhere. Very cold!

During our time in the 512th, the officers of LaRoe's crew had the good fortune to be directly across the gravel walkway from the fliers from Yugoslavia. Joe Milloy is the remaining member of that group of four. It's always good to see him and his wife, Tatyana, at the reunions each year. Remember those mornings you were to fly and, much too early, the sound of the sergeant's footsteps crunched down that gravel pathway awakening the crews who were to fly on that day's mission.

In April, 1945, the 376th was taken out of operation, and most of the personnel returned to the states. Some air crews, including LaRoe's, were sent north to Foggia, to the 451st Bomb Group, to sit out the balance of the war. A few days R and R on the Isle of Capri helped, Good wine!

On May 31, 1945, orders came for the crew from AAF Staging Airdrome No. 1 to fly aircraft B-24H #41-28861, Burma Bound?, to Hunter Field at Savannah, GA. Thence the crew went to Charleston, SC, staging area and on to 30 days leave. The crew was never completely together again.

There were two passengers added to the crew for the flight to the U. S. From Italy the route was to Marrakesh, Morocco, south of the Atlas Mountains, in Africa, to Dakar, Senegal,on the west coast of the African Horn, to Belem, Brazil, to Georgetown, Guyana, to Puerto Rico, and, at last, to Savannah, GA and Hunter Field. Lt. LaRoe's crew and two corporal passengers were home!

Ten days were spent in Marrakesh to replace some bad fuel cells. Burma Bound? was a tired old bird, but the Pratt and Whitneys did the job, never missed a beat.

The crew's arrival at the 376th was late in the war. The crew missed the really tough conditions of flying out of North Africa, over Ploesti, and any number of dangerous and difficult missions when Germany's fighters and war machine were in their prime.

Our thoughts and prayers still go to those who endured, or succumbed, to the tough times, when few planes and crews returned from bombing runs. From a personal viewpoint, LaRoe's crew thanks God for a safe return and a non-forgettable experience with a lot of good guys who became long-time friends. From the address of Rev. Humphrey at our 1998 Memorial Breakfast, "His angels shall keep you in all your ways."

The only unfortunate incident that occurred, affecting a crew member, happened on a mission to Germany. The bombardier flew with another crew. On the way home to the 376th, the plane ran out of gas and ditched into the Adriatic. This was January or February of 1945. There were injuries and an overnight stay in the cold water with a rescue the following day. Our bombardier wasn't seriously injured but spent a few days in the hospital recovering, mostly hypothermia and exposure. Shortly, he was back with the crew and flying again. There were dangers in missions flown late in the air war. Those 88s reached high with ease!

Three crew members are known to be deceased. Three still make the annual reunions of the 376th each year and have made friends with many other 376ers. We say thanks to the leaders who, over the years, have done such a terrific job of organizing each reunion. Another big thank you goes to those who produced that fine book.