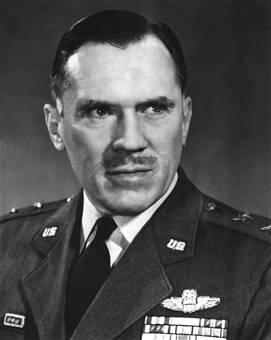 Alfred was the original lead pilot of HALPRO.  He was the pilot of the crew that ferried Ole Faithful to North Africa. He lead the first raid on the Ploesti oilfields on June 12, 1942.

The following is the USAF Bio of Alfred:

About 22,000 flying hours separate the "yesterday" when 17 year old Alfred F. Kalberer became a pilot and the "today" which finds him a major general and chief of staff, Allied Air Forces, Southern Europe, Naples, Italy.

World War II mililary aviation histories report such facts as the organization and leadership (by Colonel Kalberer) of a flight of eight heavy bombers against the Italian fleet - with such heavy enemy losses inflicted that its surrender was the inevitable result. Kalberar led his group on the last heavy bombardment of the Japanese home islands on the day they surrendered. By that time he had flown 46 combat missions as a B-24 and B-29 pilot in the middle and Far East.

"I learn something new every time I make a flight," the general tells associates. The general is as ardent an athlete as a pilot. For midday relaxation he spends most lunchtimes on the badminton court, and was a member of the doubles championship team of the Strategic Air Command.

Alfred F. Kalberer was born at Lafayette, Ind., in 1907. He had already learned to fly when he received an appointment as an air cadet in 1927. Commissioned a reserve second lieutenant the following year at Kelly Field, Texas, he was assigned to the 1st Pursuit Group, Selfridge Field, Mich.

In 1929 he resigned from active duty to make a 50,000 mile advertising tour of the United States, Mexico and Cuba for the General Tire and Rubber Co. He then became an airmail pilot for the National Air Transport. While with NAT - later known as Eastern Division, United Airlines- he flew 8,700 accident-free hours.

When not flying, he wrote nationally published articles and stories, in addition to radio scripts and screenplays. Today, he has less time for writing. However, when time permits, he writes occasional articles and is working on a book about William the Conqueror.

He resigned from United Air Lines in the mid thirties and joined the Royal Dutch Air Lines (KLM). First he lived in Amsterdam, making flights to all of Europe's capitals and to the Dutch East Indies. With the outbreak of the war in Italy, he moved to Bandoeing, Java, and flew in the Far East. Early in the fall of 1941, a Japanese airline pilot told Kalberar that Japan would be at war with the United States before Christmas. He promptly returned to the States on a three-month leave from KLM.

Timing was right. He arrived in Washington Dec. 7, 1941 and returned to active duty as a first lieutenant Dec. 10 assigned to the Army Air Corps' Ferry Command. Shortly thereafter, he was transferred to the Halpro Task Force; which was slated to attack Japan from China with B-24s. From Egypt the bomber force made the first raid on the Ploesti oil field in June 1942 with 13 B-24s. Ploesti was not attacked again until August 1943.

Because of losses, the task force did not go to China, but remained in Egypt to become the nucleus of the Ninth Bomber Command. Kalberer, by this time a major, was named operations officer for the newly formed command. In late June of 1943, he returned to the United States as a lieutenant colonel to enter the B-29 program.

Less than a year later, he was in India as deputy commander of the B-29 equipped 462nd Bomb Group. When its commander was shot down in August 1944, Kalberer assumed command of the group and was promoted to full colonel. His group moved to Tinian in the Marianas in April 1945. It returned to the United States in October, a month after the Japanese surrendered.

In April 19469 Colonel Kalberer was sent to Kwajalein as intelligence officer for Task Group 1.5, the Air Force unit that participated in the Bikini A-bomb tests. He returned to the United States in the fall of 1946 for assignment to Headquarters Eighth Air Force at Forth Worth, Texas, and served as chief of intelligence with the Eighth from September 1946 to December 1947.

While commander of the 55th Reconnaissance Group (later wing) from late 1947 to October 1948, he again participated in atomic tests. He was in charge of photography during the Sandstone Atomic Weapons Test at Eniwetok Atoll. Colonel Kalberer twice commanded the 55th - first at MacDill Field, Fla., then moved it to Topeka, Kan., in July 1948, where it was deactivated. After a three-year tour at Headquarters SAC as director of public relations and special assistant to the commander in chief - at that time, General Curtis E. LeMay - he again took command of the 55th now reactivated as a medium strategic reconnaissance wing based at Ramey Air Force Base, Puerto Rico. The 55th SRW seemed unable to remain away from Kansas and was again sent to Topeka in October, 1952, while Colonel Kalberer activated and took command of the 72nd SRW (Heavy), a B-36 unit which was built up at Ramey.

Command of the 14th Air Division at Travis Air Force Base, Calif, came next for General Kalberer in August 1955. He had been promoted to one-star rank in December 1952 while at Ramey. He was appointed deputy commander, 15th Air Force and promoted to major general in August 1957.