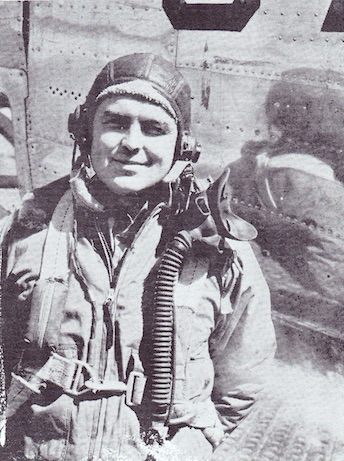 Carl B. Hupman was a navigator in the 514 squadron. He was part of the John Brock crew.

Carl wrote a brief summary of his military career:

My regular combat tour was completed in 77 days, from March to June 16, 1944. The first mission was Bolzano, Italy (marshalling yards), flying with a new and strange crew as a replacement of substitute navigator and no bombardier. The bombs were dropped through unopened bomb bay doors. It was a cold ride home, in the old brown B-24F - no compass.

At one time, I flew six straight days at altitude. No time off. We were busy.

My last regular mission was Bratislava, Czechoslovakia, for which the 376th was awarded a Distinguished Unit Citation; the only one awarded a Heavy Bombardment Group for a single mission. If my recall is correct, 90 percent were within the proverbial 1,000 feet circle. Quite a contrast to the first mission, which proves that practice (experience) is rather important.

On completion of my regular tour, I asked to stay overseas thinking I could do more good - be more valuable to the effort that way. They sent a Major from Group Intelligence to interview me to see if combat had gotten to me or whether I still had all my marbles. But I was accepted; on what grounds I do not know (probably no marbles or too few). Overseas for 14 months, with points accumulated by staying overseas, I was a civilian again by July 1, 1945 and working as a Forester - my profession prior to World War 11. I arrived home on VE day. A good way and place to celebrate.