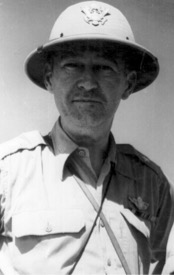 Harry Halverson was the CO of HALPRO and the 1st Provisional BG.

Silver Star
Awarded for actions during the World War II

The President of the United States of America, authorized by Act of Congress, July 2, 1926, takes pleasure in presenting the Distinguished Flying Cross to First Lieutenant (Air Corps) Harry A. Halverson (ASN: 0-11444), U.S. Army Air Corps, for extraordinary achievement while participating in an aerial flight. From 1 - 7 January 1929. Lieutenant Halverson, with Second Lieutenant Elwood R. Quesada, Air Corps, acted as relief pilot of the air plane Question Mark on the refueling flight, at and near Los Angeles, California. which remained in the air a total of 150 hours 40 minutes and 15 seconds, a period of continuous flight longer than any previous flight ever accomplished. by their endurance, resourcefulness and determination they demonstrated future possibilities in aviation which were heretofore not appreciated, and thus reflected great credit upon themselves and the Army of the United States.