I was laying in bed reading the story that Ed Clendenin wrote about his trip to Austria and meeting with Markus Reisner about the Bomben Auf Wiener Neustadt that I read in the Intelligence.
It brought back memories of my mission to Vienna on February 13, 1945. I was lead Bombardier, very heavy Flax and a long hazardous mission. My pilot Jack Susmuth got me to the IP and I took over and got my nordi on the target. It was the last oil refinery, we were flying at about 26,000 feet, it was the last one the Germans received fuel from, all the others were knocked out. And knew I was going to have a great run, my sight was right on target and God should be with me.
I yelled "Bombs Away" and the other planes dropped their bombs, my navigator, Al Brennecke and I saw this huge cloud coming up to the plane we looked at each other never did I see anything like this before at least 20,000 feet, it looked like an atomic cloud. I yelled to our pilot "let's get away from here".
My crew of 10 men, pilot, co-pilot, navigator, and bombardiers all officers, and six gunners, all sergeants, we landed at our base. I received a call from my commanding officer "Goldberg, you did it. You did it" with a happy voice "You knocked out the target. I am putting you in for the DFC". He said everything was over. Not thinking what he meant. A few months later the war was over. I am happy to think the 376 Bomb Group had something to do with that and also the Bombardier and crew.

This is a copy of his DFC citation. 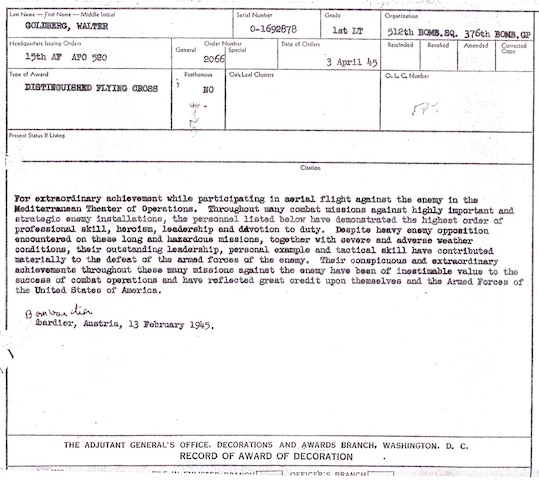