Edward Demmond crew was assigned to the 513th Squadron.  The men and their positions are:

There are 2 pictures of the crew, both provided by Frank Procopio.  Each photo is followed by the narrative written by Frank. 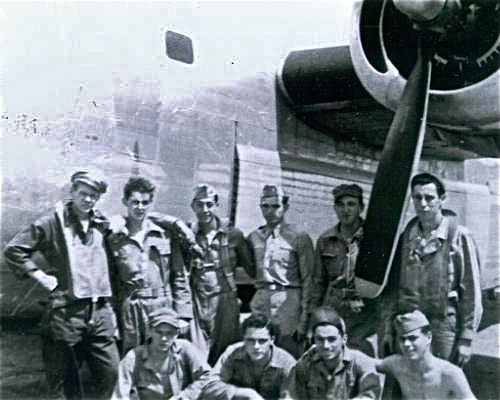 This photo was taken during our training at Westover, MA, AAFB, August
1944. Shortly thereafter we were shipped to the European Theater of Operations and assigned to the Italian based 376th Bomb Group / 513th Bomb Squadron. About three months before the end of the war, the 376th was disbanded and some of the crews went state side to train on the B-29. Our crew, and others, were reassigned to the 461st Bomb Group / 765th Bomb Squadron.

Something stands out in my mind from those state side training days. We were not together long before we began to click as a team and named ourselves the Green Hornets. Our pilot, who we called "Doc", bought us all green ski caps. We were still on post, heading for the gate to the flight line in our brand new green caps, when the Provost Marshall drove up. He dressed us down for being out of uniform on post and confiscated our caps on the spot. Needless to say, we were hot.

After our training flight, "Doc" Demmond went to Headquarters and spoke his
piece. It wasn't the last time "Doc" was in the dog house on our behalf. While
that was going on, co-pilot James Franks went off post and bought more green caps for the crew out of his own pocket. After that we kept our caps in our pockets until we got on the flight line or in the aircraft. 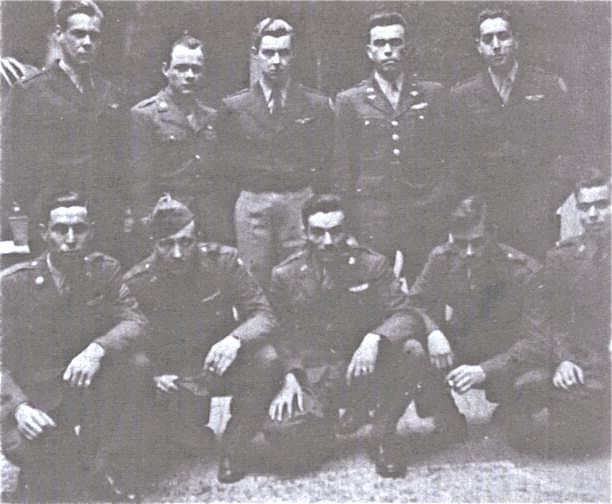 Our crew, known as the "Green Hornets", was given orders to fly home in June 1945. I do not remember the exact date or the B-24 we flew. I do remember that we were assigned the northern route from Torretta, Italy to Marrakech, Morrocco, Africa. From there to the Azores and then on to Gander Newfoundland, with our final stop at Bradley Field, Connecticut. The news made me happy because Bradley Field was not far from my hometown of
Pittsfield, Massachusetts.

On the first leg of the flight out pilot "Doc" Demmond became sick and we lost a day in Marrakech while he recovered. Because the routes were changed daily, when "Doc" was well enough to fly, we were reassigned to the southern route. This meant we would fly to Dakar, Senegal, Africa; Fortaleza, Brazil; British Guiana; Puerto Rico and Savannah, GA. This route in turn made "Doc" very happy since Savannah was his hometown!

At each stop we were only to spend the night. However, at Fortaleza we lost
three days replacing a supercharger. This time on the ground did give me the opportunity to find the answer to something I had been complaining about. At each stop the aircraft was fumigated before we could dismount. I found this irritating and approached the Brazilian Agriculture Agent about the situation. He said he understood, and wanted to show me something. He opened a cotton lined box with several bugs inside. He went on to explain that they had been removed from our aircraft, and had these alien bugs escaped alive it could have been devastating to local crops. I didn't complain again.

We made the rest of the trip without incident. I was discharged from the Army in September at Fort Bragg, NC, and the "Green Hornets" went their separate ways.