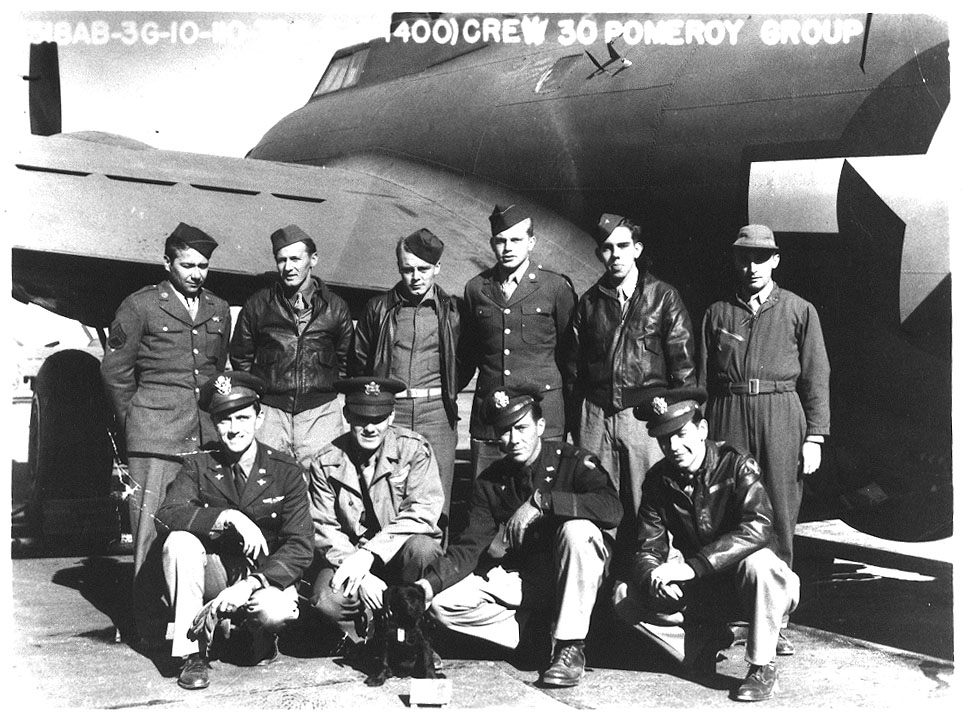 The reason for this crew picture taken beside a B-17 was that 49 complete crews were sent to Grand Island, NB to get B-24s to fly overseas. It was a mistake as this was staging area for B-17s.


History of Burton’s Crew
"Dave Burton’s crew was formed at Biggs Field, El Paso, TX in August of 1943. The pilots and four engineers had trained for a month at Clovis, NM. The crew had four crew members trained as engineers so two of us stayed with the crew as gunners. We began serious training flying many hours out of Biggs Field.  The Pomeroy group left Biggs Field Nov. 9, 1943 to go to Grand Island, NB. Leaving there by train on Nov. 29, 1943 to Norfolk, VA., there we boarded the “HMS Empress Andes” sailing Dec. 4, 1943 and Landing ten days later in Casablanca, Morocco. We were put in a US Army Infantry replacement center where we were not welcome at all.

Another crew and ours left there Jan. 5, 1944 in an Air Force C-47 bound for San Pangrazio, Italy.  Arriving there on Jan.7, 1944 and were assigned to the 512th Sqd. 376th Bomb Group as replacement crew following their losses of Dec.28th over Vicenza, Italy.  Our crew completed 50 missions with no serious injuries to anyone. We did not all finish at the same time due to crew shuffling and various things during the six months we were flying.  I finished my tour with 51 missions flying with Lt Jerry Brown to Munich, Germany on June 13, 1944.  The crew did not return to the U.S. together by ship from Naples, Italy and we had no further contact with each other except David Burton and I remained in contact and visited until he recently passed away.

As of this writing five of the crew are deceased and four have never been located. We were a very lucky crew and it was due to the skills and daring of a very good pilot and the way we all worked together as a team that got us through."