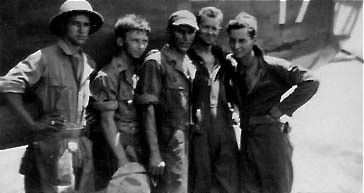 Therman D. Brown crew ferried HALPRO B-24 Draggin Lady overseas. There is no known photo of the entire passenger and crew. There is a picture of the enlisted men:

Pat McClosky (middle) was crew chief of Draggin Lady, but was not on the plane during its ferry overseas.

The passenger and the rest of the ferry crew were: