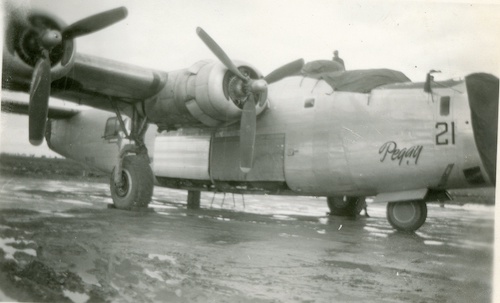 We received the above and below pictures from Delbert Mitchell.  He also sent the following story:

Yesterday, 14 March 2015, an historic event happened that has been seventy years in the making.  On 15 January 1945, B-24H 42-78400, Peggy, took off from their base in San Pancrazio, Italy bound for their target in Vienna, Austria.  There were many other B-24's in formation, all with the same destination.  The crew of Peggy settled in for a long day.  After the bomb run on Vienna, the formation turned towards their home base.  In the cockpit of Peggy were two pilots, 2nd LT Richard S. Ritter, pilot and plane commander, and his copilot, 2nd LT Ralph G. Wilson.  Both pilots were married, and they were also expectant fathers.  Shortly before reporting to the 376th Bomb Group in San Pancrazio, their wives had informed them of the good news.  Now, as they were finishing their bomb run, their thoughts and conversation may have been on that topic.  As the formation flew over Yugoslavia, German flack guns opened up on the formation.  Peggy was hit, and with two engines out, she began to lose altitude.  Falling out of formation, and falling behind, Peggy was ripe for the German gunners.  With altitude becoming a critical factor, Ritter gave the order for the crew to bail out.  After the crew bailed out, Ritter and Wilson tried to keep the airplane on course, but it was to no avail.  Ritter ordered Wilson to bail out, and as he tried to keep the airplane level, Wilson left the airplane.  The parachute on Wilson did not fully deploy due to low altitude, and he died instantly after striking the ground.  Ritter stayed with the airplane, possibly trying to keep it level while he bailed out, but we'll never know as the aircraft went into a flat spin, and crashed, trapping Ritter inside.  Wilson and Ritter's bodies were recovered by Yugoslav partisans, buried in a village cemetery, then repatriated to the American Military Cemetery in Nettuno, Italy in 1947.

On June 1st, 1945, Douglas Ralph Wilson was born in Vancouver, Washington, and on June 21st, George Allan Ritter was born in Pennsburg, Pennsylvania.  The two new mothers communicated for years about their lost husbands, and their new sons, but eventually they both remarried, and with all that goes on within families, they lost contact with each other.  Thus the two boys grew up and went their way into life as we all do, and unfortunately, never knew of each other.  Doug joined the Navy, married, has two sons, and owns a successful office supply business.  George pursued a career in music, had several bands, and did gigs across the U.S.  Ultimately, he decided on a career as a doctor of chiropractic practice in Las Vegas, Nevada.

On March 14th, both men met for the first time here in Las Vegas.  George brought a plethora of photographs and mementoes, including his father's funeral flag, with 48 stars, and his father's Purple Heart.  Doug brought a beautiful looseleaf binder showing the Missing Aircrew Report, as well as showing the flight path when Peggy was mortally wounded.  He also brought George a book called "Forgotten Fifteenth", the Army Air Force command both fathers were assigned to.  All told, over five hours was spent reminiscing about their fathers, family careers, kids, grandkids.  It was a great day, and way too short to cover all aspects of the last seventy years.  We have all pledged to keep in touch. 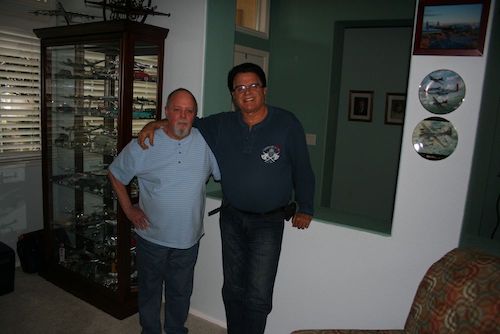