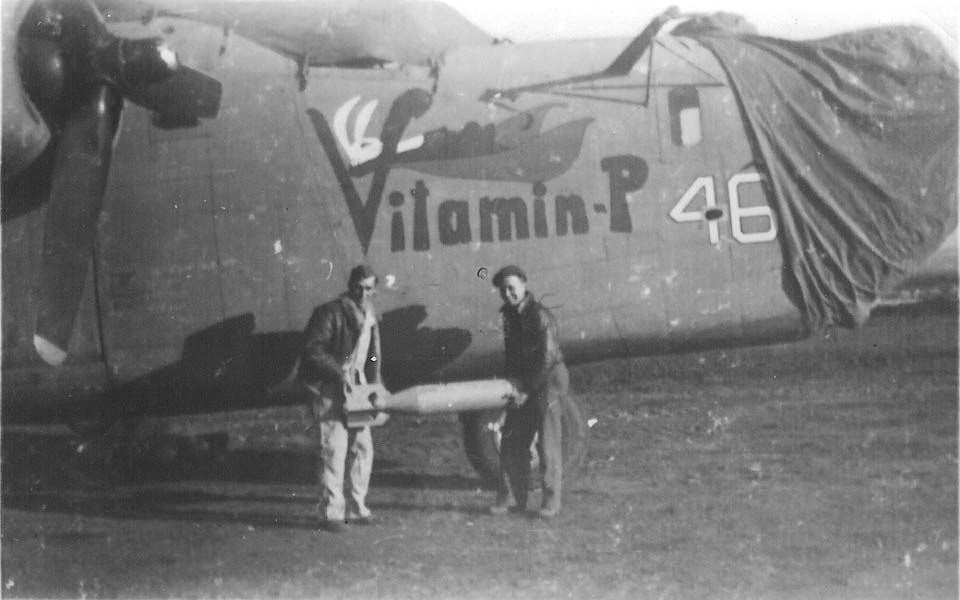 We received a letter from Jack Gross. Jack's father was a member of the crew that named the plane.  This is what Jack wrote:

My Father, Herbert Gross (Asst Eng/Tail Gunner), and crew were "given" the B-24 at the completion of training, in Topeka, KS, 20 Sep 43. The pilot let the enlisted crew come up with a name, and an anagram of the first letters of the crews' home states was selected: VITAMIN-P. The nose art was applied by the radio operator S/Sgt. Carl Boyd. After checking out the new aircraft's systems and putting some hours on the engines (orienting), they were loaded up with supplies for their destination theater (unknown at the time), and on 4 Oct 43 took off for Morrison Field, FL. Flying over Alabama, they lost an engine. Just before being ordered to bail out, the navigator located a fighter strip outside of Tuskegee (332nd FG) and the pilot made a safe landing. As there were no accommodations for white soldiers on the base, the crew was put up in Auburn, AL, where they stayed for more than 2 weeks waiting for replacement engines. Finally, on 16 Oct, the Air Force brought the crew back to Topeka and gave them another B-24 which they named VITAMIN-P II (42-73243), and wound up with the 14th AF 308th BG 375th BS in China.
VITAMIN-P was eventually repaired and put into service with the 15th AF 376th BG 513th BS.

Lost 17 Feb 44 - MACR 2630. According to Bob Moyer (Waist Gunner), the group was trying to avoid weather on the way to the target. The mission was in support of the Anzio landings. The planes were trying to increase their distance from each another to avoid contact, and he believes the Pilot somehow stalled the plane and crashed.