The following was sent to me in an email:

I have some detail about the 376th BG loss over Hungary in 1944 summer. Please excuse me ahead for the grammatical mistakes. (Editor's note: I've tried to correct some of the obvious mistakes, hopefully without changing the content.) 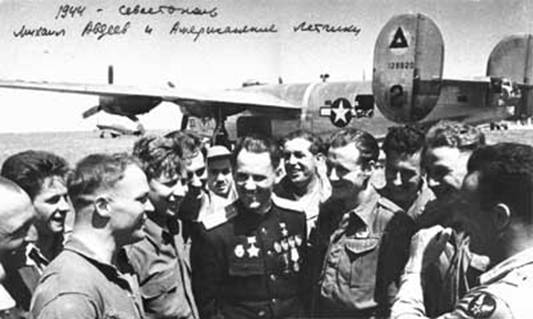 Editor's note: See below for additional comments about this photo.

(Note: Herman wrote about his experiences in his book A Measure of Life.)

One of the crew member S/Sgt. Joseph O'Hara (32609530, Patterson, New Jersey) +(Gunner) hoped out, but something wrong with his parachute (maybe burned). Local civilians found them, later buried according to his religion.

The survivors was delivered to Bánhida (now it is a part of Tatabánya where I live) to the gendarme's building, then they got into German captivity.

I hope so the staff's survived members got home after the end of war.

The Big Marge was (shot) down by a German fighter plane (Bf-109 G6 - Messerschmitt). The bomber got flamed, seven of the crew members (jump)ed out. This action saw by the nearest plane: S/N: 44-40884 black 29 of the 512th BG.
2Lt. Phil Hoskins and Sgt. Angelo Monolo. the Big Marge was rolling down to filed and exploded 1km NE from Környe Hungary (see the attachment) - about 60 km W from Budapest. MARC No: 6958

The story of this plane exciting. Started from the USA flight to South America then North Africa. Shortly after the 15AF went to South-Italy. This was the first American plane which (flew) to Krim peninsula with American delegation. The attached photo taken is Sevastopol with the first meet of Soviet and US pilots. 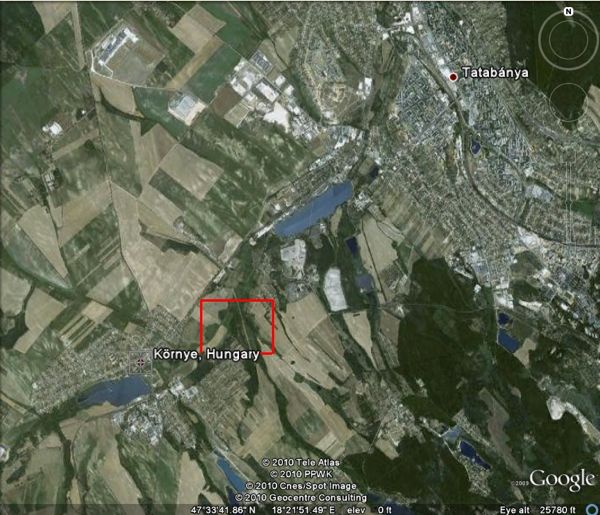 Below is a blow-up of the crash site from the above image. 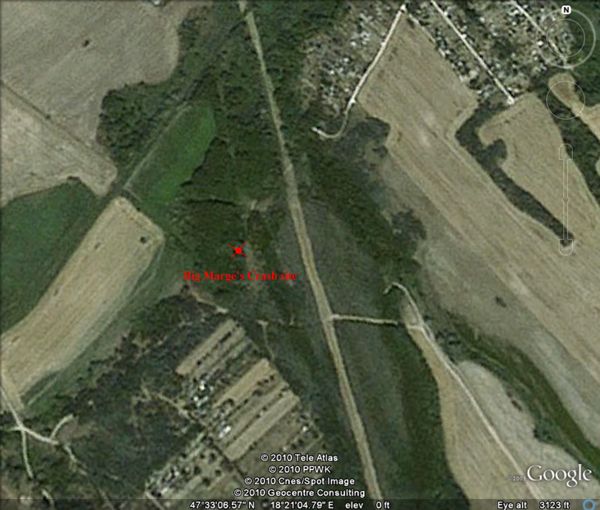 More comments about the photo of Big Marge.  For the record, Big Marge was reported "lost" on June 11, 1944.  In fact, she had diverted to the Crimea and landed behind Russian lines.  She returned to the 376, with her crew, on June 23.  She was then shot down on July 14.

One of my Hungarian friend, who living in Canada sent the picture and the majority of the data for me. His name Gábor Horváth. He collect Russian airplane loss datas, but several American substances were found already to it.


I found an exciting web site for you, where you can find information from the Big Marge: (site not operational) the information wrote in White Russia (Belorussia), so I could not understand the whole story, but they wrote some extra information:
For the national commission established for the protection of the cultural heritage, Crimean Peninsula's driving research fellow, JV Black (И.В.Черныш)  under this period he collected the Krím peninsula's regional studies what Vadim Konstantimnovich found in a Garagulya's museum dump.
The photograph with the inscription: 1944 - Sebastopol Mikhail Avdeev and American pilots. The picture prepared by Evgenis Chaldean photo war correspondent.Liberator was wounded in a battle, according to the author of the article visible the trace of the fast correction the entrance edge of the wing and between the tribe, and maybe the bomb space doors.
The article take the emergency landing onto the end of 1944 Mays, or the beginning of June, when the injured bomber landed to the Poltava airfield. The machine gets into Szevasztopol following the damages correction, the photograph was taken at this time.

Mikhail Avdeev, one of the Russians in the photo, became a Hero of the Soviet Union.  You can Google him to find out more about him,