Lady Be Good on ramp prior to her departure overseas.

Another photo of 41-24301 prior to her overseas departure.  Photo from Samuel Rose.

Lady Be Good was the name of a 1924 Broadway musical. It was the first successful musical for brothers George and Ira Gershwin. The song with the same name was created for the musical and recorded in 1924 by Fred Astaire with George Gershwin on piano. Click here to hear an instrumental version of this 1924 song.

The B-24D, Serial Number 41-24301, destined to be known as Lady Be Good and one of the most recognizable aircraft from World War II, was manufactured at the San Diego Division of the Consolidated Aircraft Company in the fall of 1942.

The aircraft was ferried to Topeka Army Air Force Base and assigned to the crew of Lt. Samuel D. Rose for overseas deployment in March 1943. Lt. Rose and his crew and their as yet unnamed B-24 arrived at the 376th Bombardment Group base at Soluch, Libya on March 23, 1943. The aircraft and crew were assigned to the 376th's 514th Squadron.  She was assigned RCL 64.

Of the twenty-four B-24s participating in the mission only the Lady Be Good failed to return to Soluch or be accounted for. The only contact with the lost crew was a terse radio distress call shortly after midnight on April 5th.

In February 1959, a British Petroleum oil exploration team discovered the nearly intact "Lady Be Good" 448 miles southeast of Soluch in the untravelled Libyan Desert. Investigation at the crash site confirmed that the crew had bailed out after exhausting their fuel.

The discovery of the wreckage set-off an extensive search for the crew encompassing an area of thousands of square miles. In February 1960, nearly a year after the Lady Be Good reappeared, the remains of five crew members were found 78 miles northwest of the B-24. Leading to the crew's last camp site was a trail of markers and personal equipment left behind as the men trekked northwest in temperatures up to 130 degrees. Ultimately, two additional remains, Sgts. Ripslinger and Shelley, were recovered over 100 miles from the bailout point.

The exceptional preservation of the Lady Be Good after 16 years exposure to one of the earth's most extreme environments prompted the return of samples from the wreckage for technical study. In 1968, Mr. James Walker, a research engineer with McDonnell Douglas Corp., initiated an expedition to the crash site with a Royal Air Force desert rescue team. Components recovered during this expedition subsequently provided invaluable data on the useful life of aerospace materials. Displayed samples from this investigation were donated to the Pima Air & Space Museum, (Tucson, AZ) collections. 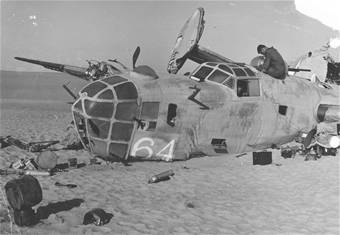 Nose of Lady Be Good at her Libyan crash site.