……At noon on the 11th, nine B-24s, led by John Payne and his crew in HALPRO's battle-worn "Black Mariah," began taking off after the routine refueling stop at an advanced RAF base. The formation was reduced to eight planes when Capt. Sam Oglesby, with Nathan Brown as co-pilot, blew a main gear tire while taxiing to take-off. The eight B-24s were deployed in two elements of four planes each. Maj. Dick Sanders led the second element trailing Payne at the head of the formation.

En route to Italy, the formation encountered a weather front, which extended from the coast of North Africa to a hundred miles over the Mediterranean. Risking early detection from German radar stations on Sicily, Payne climbed to 7,500 feet to top a nearly solid overcast below. Approaching the southwest coast of Italy, the formation climbed to 18,000 feet, and the overcast fen away to scattered clouds and a dense haze at ground level. The entry into the Naples area had been planned to avoid over flying the known heavy flak concentrations. Nevertheless, the two elements, which had become separated in the process of climbing to bombing altitude, encountered a curtain of dense flak 2000 feet in depth. The German gunners threw up a barrage of exploding shells intended to saturate the space through which the B-24s would fly on their bomb runs. Some gun batteries radar-tracked the flight of the formation, and their clusters of four 88 mm shells followed the B-24s' course changes.

As John Payne's crew began their bomb run over the Victor Emmanuel dock complex in Naples Harbor, the separation between the formation's elements had grown to nearly a mi1e. Looking down, several crewmen saw two fighters climbing to intercept the B-24s. One of the Me-l09s converged rapidly on Payne's lead element. [One unconfirmed report identified these fighters as Italian Macchi 202s.]

The planes flying on the right and left of Payne were piloted by J. K Brereton and Norman Appold respectively. In the element's number four position, or directly behind and slightly below Payne, was Lt. Louis Prchal, a HALPRO veteran and on his first mission in command of a crew. All four aircraft were flying in a close diamond formation. The bolder of the two fighters which began to stalk Payne's element pulled up behind Appold's plane whose tail guns had frozen up. Unable to use his guns, tan gunner H.L. Small advised Appold, over the intercom, whenever the fighter was in position to fire. Immediately, Appold would raise and lower the nose of his plane to throw off the German's aim. After several errant bursts at Appold's plane, the frustrated German pilot slid to his right and approached to within a hundred yards of Prchal's trailing plane without being fired upon. John Payne's tail turret gunner, Sgt. Ted Drazkowski, recalled the next events as follows: “I was doodling around with my machine guns, trying to get them to operate, when I looked out my window. On my left, at about five o'clock, there sat this Jerry Me-l09 just keeping pace with us. He was less than a hundred yards from me. I could have bit him with a shotgun. I swung my guns on him and he must have, spotted this movement because he banked to his left and went underneath us. I attempted to me (?) but to no avail." (Figure 1.) 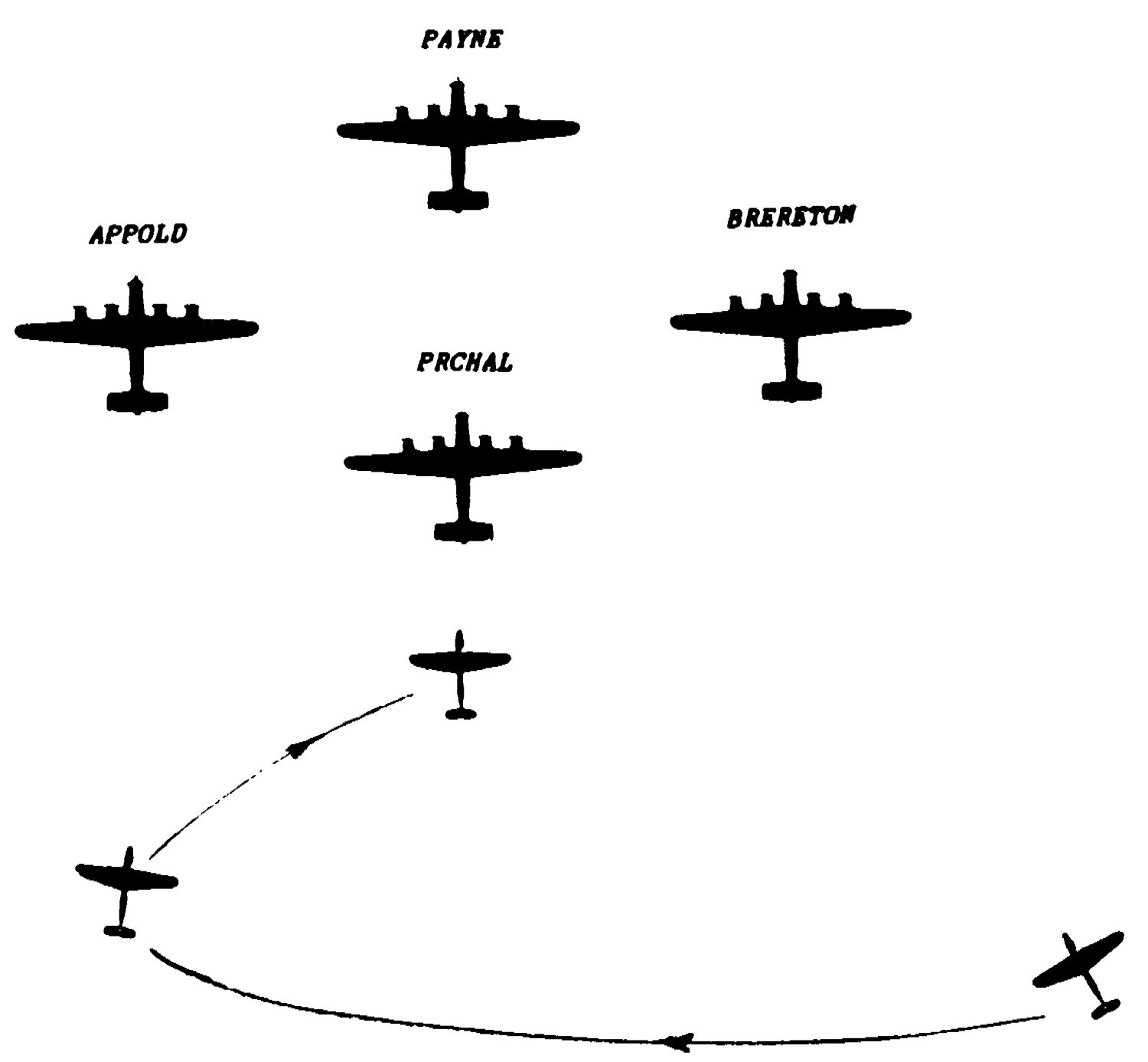 Several crewmembers in all four of the lead element planes saw the approach and maneuvering of the Me-109 pilot. Every gunner in a position to fire on the fighter did so, but their guns jammed after a few rounds or failed to function at all. Tail gunner Ken Gardner, in Brereton's aircraft, managed to get off five bursts without any visible effect before his guns jammed.

The fighter responded with short bursts of machine gun and cannon me. The obviously experienced German pilot observed that the guns in the B-24s had fallen silent. Emboldened, he edged to within point blank-range-less than 200 feet-of Prchal's B-24. He opened tire and drenched the bomber with multiple hits of 20 mm and 7.9 mm shells in the engines and fuselage. With two engines and the fuselage engulfed in flame, Lt. Prchal dropped out of formation in a descending left turn. Only navigator Ted Schoonmaker was able to escape from the plane minutes before it exploded.

Ted Schoonmaker's recollection of the incident is still vivid after fifty years: "The fighter closed in on our tail, and when he got no return fire, he just sat there and raked the whole aircraft. I was in the nose with my bombardier [Lt. E.C. Matheny]. We helped each other put on our chutes because it was obvious that we were going down with the engines on fire. I went out the nose wheel [door] and called Matheny to follow me. He said he would but never did. I estimate I bailed out at around seventeen thousand feet. The plane was going down rapidly but under control. Then below me, I guess at about twelve thousand feet, there was a big blob of smoke when the plane evidently blew up."

As Prchal's burning B-24 fell away, the enemy fighter edged even closer to the remaining three bombers. It essentially took up Prchal's element position, directly aft of Payne's lead ship and between Appold's and Brereton's planes. Oblivious to the many malfunctioning machine guns directed at him, the German pilot hammered Payne's plane, barely seventy-five feet ahead, with dozens of explosive and armor piercing shells.

In the rear of Payne's plane, gunner Ted Drazkowski, who was close enough to see the features of the determined fighter pilot, recounted the following: "Then all Hell broke loose. A 20 mm hit my three-inch-thick glass window dead center and it was smashed. I could not see [out]. The next time I looked, it wasn't even there--it had fallen out. That shell sure had my name on it. Soon, there was a pounding on my turret door. I opened it, and [waist gunner] Bob Krager motioned for me to come out and I did. We didn't know what was going on forward. There was no intercom. '

"The plane was staggering badly now, and it was difficult to stand up and walk. Bob kept pointing to the bomb bay, so 1 opened the door to it, and a huge mass of flames shot out singeing Bob and me. There was nothing but fire in there. We were carrying a bomb bay gas tank that must have received a direct hit. I slammed the door shut and pointed to the rear escape batch. After checking my chute straps, I opened the batch on the floor of the fuselage, and bailed out feet first. Bob followed." 19

The fire intensified in the bomb bay and progressed to the forward fuselage. Flames engulfed the outside of Payne’s B-24 which began a controlled descent with Appold and Brereton maintaining their wingman positions briefly.

Up to this point, only a few isolated rounds could be fired by the frustrated waist and tail gunners in the formation's first element. Waist gunner Alphonse Schembri, in J.K. Brereton's plane, had to recharge his gun after every shot. The top turret gunners, also having to deal with clearing their frozen guns, were unable to depress their turrets sufficiently to fire at the intruding Me-l09. However, the still operable flexible nose guns in the two planes flying on Payne's wing were now able to fire on the fighter as it moved into the formation. Bombardier John Hogan and navigator Donn Odell fired several bursts from their single .50 caliber guns into the cockpit and engine of the fighter which pulled straight up, fell off into a steep spiral dive, and crashed into the mountains far below.

John Payne's flaming B-24 continued it's controlled descent until being lost from view behind hills below. A repeated radio call, "Payne to Sanders" was heard by co-pilot Hal Simmons flying in the second element of the formation. A short time later, others in Simmon's plane saw a flash in the hills south of Naples, presumably marking the crash of Payne's plane. It was speculated that Payne undoubtedly had wounded crewmembers aboard, and characteristically, he elected to stay with them to the end. Only gunners Ted Drazkowski and Bob Krager were able to bail out.

The loss of John Payne, Louis Prchal and all but three of their crewmembers was a severe blow to the fledgling 376th Bomb Group. Payne, one of the first officers chosen to join HALPRO, was an able combat leader who had risen to second in command of the 376th. He would have no doubt been a strong choice to succeed George McGuire as group commander. Two officers who talked to Payne before the mission said he was not his usual ebullient se1f. He seemed to have a premonition about the outcome.

In Cairo, there were questions in Ninth Bomber Command headquarters over the circumstances, which led to the loss of the two B-24s over Naples. Dick Sanders, Norman Appold and J.K Brereton were summoned to provide first-hand - briefings to Generals Ent and Strahm on the costly January 11th Naples mission.